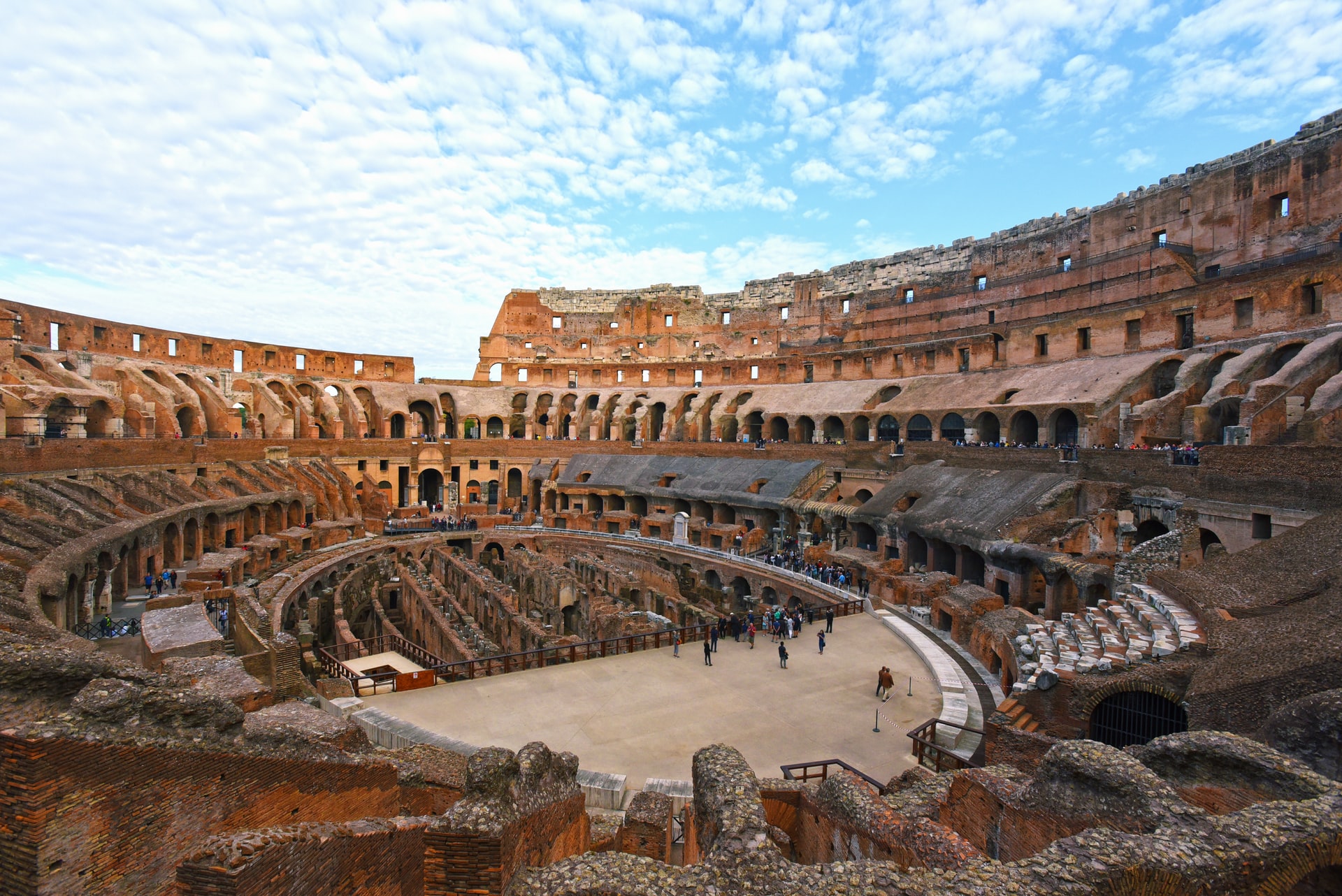 If there’s one part of the Roman experience that demands an expert guide, it’s the Forum and Palatine Hill. And since the Colosseum is part of the same complex, it’s a no-brainer to have that same guide recreate the sights and spectacles of combat in that most iconic of all of Rome’s monuments.

The most recognizable of Rome’s many ancient sights by a very long way, the Colosseum is an imposing, incredible structure that housed 80,000 spectators – all of whom were given a free ticket for life! Visiting it transports you back in time to the Roman Empire’s powerful and infamous past, but doing so with a friendly and professional English-speaking guide brings alive the traditions and rituals that surrounded the games held in the amphitheater.

Your guide will also recount the fascinating stories of the famous gladiators who thrilled the crowds with their brutal combat to become celebrities if they survived.

This part of the tour takes roughly 45 minutes and finishes inside the ticketed area, after which you will have about 30 minutes of free time to explore the interior of the monument on your own.

Exiting the Colosseum and crossing Piazza del Colosseo beneath the Trajan Arch, we then embark upon the second part of the tour, the Palatine Hill.

Before Rome became a city, it was a cluster of separate villages, one atop each of the seven hills of Rome. The Palatine Hill, towering over the river Tiber, was the perfect strategic spot for the first Emperor Romulus to found Rome nearly three thousand years ago, and it remained the seat of the emperors for a millennium afterwards. Up there you will see the vast palace of the Emperors, and stunning views across the entire city and down onto the Circus Maximus where Ben Hur raced his chariot.

Our final stop is the Roman Forum, the beating heart of Ancient Rome. Here, you will be able to literally walk in the footsteps of the emperors – see the original Capitol and Senate – and marvel to be in the birthplace of western history. As well as the highfaluting stuff, you will also find out what life was like for the ancient citizens in the political, social and economic centre of the ancient city.

We’ll then wrap up the tour, after which you’re welcome to continue to wander freely through the Forum, or head off for some local food and drink (our fave spot is Monti right next to the Forum exit). As always be sure to ask your guide for locals’ tips on where to eat and drink!

This route covers about 1.5 miles (2 km) in total and is conducted at a leisurely pace that is suitable for all. The tour duration is around 3 hours, including the break inside the Colosseum.

When we recommend specific tours, we use our considerable expertise about visiting Rome to select nothing but the absolute best tours and providers for you.

We do not work with companies such as Viator, GetYourGuide, or TripAdvisor, as they all charge a huge commission to independent operators, severely denting livelihoods in a sector that has already suffered significantly during the pandemic.

Instead, we go direct: all of the tour operators that we promote in our Tours section are personally known to and endorsed by us, based on our years working in the Rome travel business. By booking tours with these providers, more of the fee goes to the people who deserve it, and much less to the middlemen.

The small print: Rome Vacation Tips endorses our tour providers, but any transaction carried out between you the client and a tour operator is a relationship between you and the specific operator. Any issues or queries about a specific tour should be addressed directly to the operator with whom you booked using the contact details they have provided.

Because of Covid-19 precautions, it is strongly advised that you
buy tickets in advance to visit attractions in Rome.